The Brand of Hedge Funds 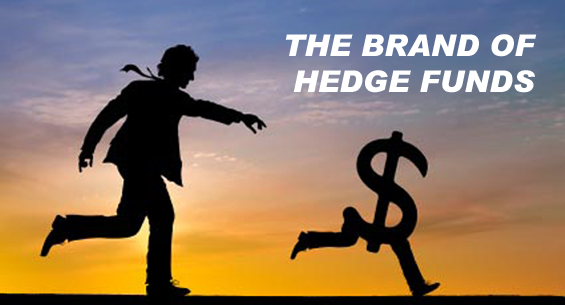 With almost US$2 Trillion under management, the hedge fund industry is a significant component of the global financial market.  To put their size in context however, it is important to realise that the size of the world equity markets are around US$30 trillion, a factor of more than 10 times larger.

During and immediately after the 2008 financial crisis, hedge funds became a convenient media and political scapegoat- not just the crisis itself, but for any volatility in practically any market– blamed for spikes in food prices, oil prices and more.   From being the darlings of the financial world, the brand of the hedge fund market faced a significant (and largely unjustified) threat.

To learn more about the realities facing hedge fund brands, we spoke to Ron Resnick, Co-Founder and Partner of CounselWorks, a business strategy and regulatory consulting firm which provides project based consulting and manages compliance and regulatory programs for hedge funds, private equity firms, investment advisers and broker-dealers.

Prior to founding CounselWorks, he was a Managing Partner, the Chief Administrative Officer and the General Counsel of Highbridge Capital Management, one of the largest hedge funds in the world.  Upon joining Highbridge in 1993, and throughout most of his tenure, Mr. Resnick was responsible for the oversight and day-to-day management of Highbridge and its administration, operations, human resources, media relations and legal and regulatory activities.  As a key member of Highbridge’s management, Mr. Resnick, organized and launched over twenty private funds, and played a key role in negotiating the $1.4 billion sale of Highbridge to JPMorgan Asset Management Holdings, Inc. in December 2004, without a loss of operating control by Highbridge’s principals.

Q: How has the hedge fund industry ‘brand’ suffered during the financial crisis?

[Ron Resnick]  The hedge fund industry in general as a brand has suffered during the financial crisis because the poor performance of many funds, and the failure of many funds to function as a ‘hedge‘ and to preserve capital, has caused many people to question the non-beta value of hedge fund strategies and to question the hedge fund fee structure — which is lucrative for fund-owners and not obviously beneficial to investors when funds have poor performance.

I personally think that it’s only the ignorant and populism pandering politicians who treat the hedge fund industry as a scapegoat for the financial crisis.  It was the extremely heavily regulated investment banks who, risking their shareholders’ money, levered their firms up to 40:1!  Most hedge fund managers have a significant portion of their net worth in their own funds.  The interests between hedge fund managers and their clients are largely aligned and, as a result, leverage in hedge funds was a fraction of what it was at the supposedly heavily regulated investment banks.  The problem is that publicly traded companies have an asymmetric risk profile problem in that portfolio managers and executives at public companies are incentivised to take excessive trading risks because if they win big they make a fortune and if they lose big public shareholders and maybe taxpayers pay the price – and those executives then quit their public company jobs and happily get jobs at  hedge funds!  Hedge funds don’t have that asymmetric risk profile problem because, in general, the interests of the hedge fund managers are aligned with their investors.    I think only people who are pandering to perceived public passions are blaming hedge funds for the financial crisis.

Q: How do you feel individual funds themselves, and their brands, have been affected by the crisis?

[Ron Resnick] I don’t think people have lost confidence in the premise of a hedge fund brand; it’s the larger firms that had the brands and the small and mid-sized firms that did not.  With many small and mid-sized firms being hit hard by redemptions and poor performance (and some closing),  investors have gravitated to the larger, best known and most respected hedge fund firms such as Highbridge and Och-Ziff as people perceive safety in blue-chip, long standing firms.

Q: How have events such as the Madoff scandal and the LTCM collapse affected the industry?

I think Long Term Capital and  Amaranth aremuch better examples  Those were two well-respected hedge funds.  Long Term Capital which failed to manage their risk despite having Nobel Prize winning executives, and Amaranth which was the first well-respected multi-strategy firm to transform itself into a single strategy firm without telling anybody!  These two episodes really triggered the institutional investor focus on the infrastructure – business management, operations, risk management, legal, compliance – side of the business.

Q: What are they key strategies for funds who want to re-invent themselves?

[Ron Resnick] Before the financial crisis, there was an ever-increasing emphasis on the business side, or the non-investment side, of the business.  This meant expanding and deepening the business oversight, operations, legal, management and compliance aspects of hedge funds.  After Amaranth, I think to a significant extent, the business side became more important and of greater focus for institutional investors than the investment side.    This trend, while still in place, has decelerated.  During the crisis and immediately thereafter the focus was less on infrastructure and more on, “…I need to find a manager, any manager, who can make some damn money!”

Q: What are your views on the criticism of the hedge fund industry having a lack of transparency?

[Ron Resnick] I think transparency in this sense is a red-herring.  A multi-strategy hedge fund could give an investor or the SEC it’s daily trade blotter and accomplish “transparency,” and the recipient would have no idea what to make of the trades, which positions were related to which, which hedges were specific to certain positions, which hedges were fund level hedges, etc.

The focus properly is less on transparency in the sense of positional transparency and more on building-out the business side of the business and expanding the infrastructure and deepening the bench of operational, legal, risk management and compliance talent .  This will give institutional investors greater comfort that professionals other than the investment people are watching the store!

Q: Are there any differences between the challenges funds are facing now versus pre-crisis?

[Ron Resnick] With respect to new funds, they are facing higher barriers to entry than they had before in terms of the minimum assets under management with which one must start trading, and significant costs to build up the non-investment infrastructure side of the business which one must have in place to be plausibly attractive to serious investors.

With respect to rebuilt funds, I think their managers should take up farming.  In this environment here has to be an easier way to make money than for someone who recently lost investor money to return to the same trough and solicit the same people for new money

Q: What is the role of media relations in the often secretive hedge fund world?

[Ron Resnick] Some firms such as Renaissance Technologies relish the cloak of secrecy they cultivate but the fact is that it is not funds that have been strategically secretive as much as it has been securities regulations that prevent managers from talking about their funds or discussing investment performance.  Generally it has been easier and safer to stay away from the media.

Q: Does corporate social responsibility play a role within the hedge fund strategy?

[Ron Resnick] I don’t think there is a specific role.  The purpose of a hedge fund is to make as much money, on a risk adjusted basis, for its investors as possible.  In so doing, the owners of the hedge fund firms get fabulously rich and have very often donated significant amounts of money to charitable organisations.

Q: How do you feel the new SEC rulings on fund advertising will impact the industry?

[Ron Resnick] I think big brand fund management companies which can afford television ads will look closely at advertising on TV.  Each big firm may be reluctant to be the first one to put an ad on TV on the grounds that, from the point of view of the culture of the hedge fund industry it seems, well, a little cheesy.

But I think some big firm will take the step and others will over time as well.  I think it will be a way for blue-chip firms who can display great long-term track records to raise significant additional assets.

Another impact:  If I were a traditional third-party hedge fund marketer I would start looking for another career.

Keep in mind that being able to advertise on TV is completely separate from the question of whether the people seeing those ads are eligible to invest in the funds being advertising.  Nothing in the JOBS Act changes investor qualifications or net worth requirements.

Q: Do you feel these rulings will allow non-US funds to more aggressively advertise in the US?

[Ron Resnick] While I do not think there is a definitive answer until the SEC publishes its proposed rule based on the legislation I don’t see why investment funds which are open to U.S. persons and which are managed by non-U.S. firms wouldn’t be able to advertise.  It would not make sense for non-U.S. firms to advertise in the U.S. foreign funds because taxable U.S. persons generally have no interest in investing in foreign funds.  I think television or radio would be a very inefficient way for non-U.S. firms selling non-U.S. funds to reach tax-exempt U.S. investors (like pension plans) who can invest in foreign funds.

The hedge fund industry is not an island.  As the global financial market evolves, so too must every element within it.  Participants ranging from traditional retail banks through to individual financial advisors all face changing regulations, requirements and changed attitudes from their end customers and investors.

The next few years will certainly see a wide degree of changes within the hedge fund market but we must realise that this industry- more than many parts of the financial world- have the capacity to innovate and adapt fast.  Many funds now have incredibly robust risk management strategies (a magnitude more so than many traditional investment banks) designed to defend capital and secure returns.

Hedge funds attract some of the smartest and most talented individuals from a variety of disciplines and successfully deliver their services for many hundreds of thousands of investors around the world.

This industry will perhaps never really shake off the aura of secrecy and inevitable rumour mill, but investors and risk managers need to really start to judge funds on the metric against which the funds judge themselves:  performance.

Up Next: How Participatory Culture and Mass Collaboration are Shaping our World.