Why Economics is Failing 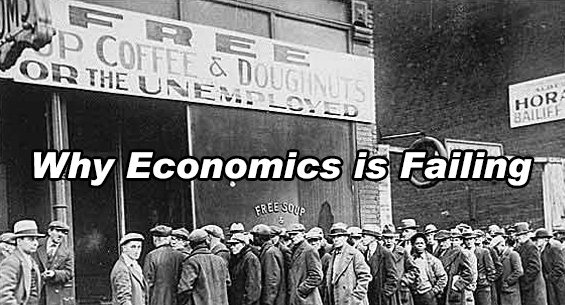 “Macroeconomics has not done well in recent years…” writes Nobel Laureate Joseph E. Stiglitz, “The standard models didn’t predict the Great Recession; and even said it couldn’t happen. After the bubble burst, the models did not predict the full consequences.”  In a hugely relevant recent paper titled “Reconstructing Macroeconomic Theory to Manage Economic Policy,” he explores how modern macro and microeconomic theories simply aren’t appropriate for our world today.

As Stiglitz notes, the loss in output as a result of the current downturn (between the US and Europe alone) amounts to over $5 trillion; equivalent to the loss- from the global economy- of a country the size of Japan.

Much of modern economic policy is anchored in the views of Keynes.  His model(s) asserted, “a) markets were not self-correcting, at least in the relevant time span—unemployment could persist; (b) in  deep downturns, monetary policy was ineffective; and (c) fiscal policy—government spending— could stimulate the economy, by a multiple of the amount that was spent.”  These assumptions somewhat neatly allowed policy-makers to explain the reasons behind economic failures of previous generations and- as such- became the backbone on which future models were developed.

In more contemporary times, Keynseian economics  have been reconciled with microeconomics through a process of adaption and reform.  These highly calibrated models and simulations have persisted for the past quarter-century or more, allowing economists to develop complex predictions of how [they feel] regional, national and global economies work; albeit with some intuitively incorrect caveats.  Many models still rely on the ‘rational and representative‘ economic agent, meaning that information asymmetries and many other empirically obvious market-dynamics such as non-rational motive(s) could not be accounted for.   In truth, much of the dynamic risk in modern economies; markets that cannot clear, market failures, and so forth; cannot be understood with the lens through which we currently assess our world.

Time for a reconstruction

Greenwald and Stiglitz, in 1986, laid out a theorem proposing that “whenever there was asymmetric information or imperfect risk markets—that is, essentially always—markets are not constrained Pareto efficient (taking into account the costs of obtaining information and creating risk markets).”  The critical outcome of this model is that it accounts for the fact that privately-profitable transactions may not be socially desirable; “The banks may have incentives to engage in contracts with each other that make, for instance, the economic system more unstable (which is exactly what they did). There  are important (pecuniary) externalities associated with individuals’ actions that matter and which individuals do not take into account. Price changes have not just distributive  consequences, but also shift incentive compatibility, self-selection, and collateral constraints.”  Interestingly, this view also helps us take into account rigidities that exist in the market (such as wages) and even micro events (such as incomplete market indexing) which can have significant macro consequences.

Stiglitz notes that, “the representative agent model (and its descendants) imposed a straightjacket that made it difficult to think clearly about what was going on [in the economy]… To me [Stiglitz], the strangest aspect of modern macroeconomics was that the central banks were using a model in which banks and financial markets played no role.”

Policies that Don’t Kill You…

Understanding the source of disturbances, the reason for small shocks creating large effects, and the longevity of deep-downturns sit at the centre of Stiglitz’ view.  Not only does he observe that most major downturns are man-made (rather than being exogenous technology shocks), but adds that the shocks that cause them amplify fast like contagious disease, and result in economies with persistent unemployment, debt and bubbles.

Stiglitz argues that austerity, multiplier effects, debt and deleveraging and the liquidity trap caused by zero-bound interest rates are important policy factors the world needs to take into account.

Firstly; austerity (particularly in Europe) has not worked.  Record unemployment levels, and a multi-trillion Euro output gap (that is widening) have shown that the mechanisms deployed to stabilise economies have not worked.  “While the crisis made the problems of the euro-structure clear, they were present long before.  Indeed, the euro helped create the crisis: for the markets seemed to have vastly overestimated the extent to which the single market/single currency had reduced risk (another example of market irrationality), leading to excessive lending to the afflicted countries. And the structure of the Eurozone provided no way to curb the excesses thus generated.”

Secondly; more understanding needs to take place of the multiplier effect of government spending and expansionary policies on the real-economy, particularly when high unemployment and surplus capacity exist.  This analysis also needs to understand the multiplier-impacts of investment in differing industries, together with the corresponding crowding-in (or out) responses from market participants.

Thirdly; he argues we need to re-think our views of debt. “There are many in Europe and America who believe that our current troubles arise from excess debt, at both the household and national level. Those focusing on debt at the national level have warned that debt financed spending will in the long run be counterproductive.” Drilling deeper into the structure of debt within the economy shows that the bottom 80% of US consumers (for example) were consuming approximately 110% of their income pre-crisis, with the top 20% garnering 40% of national income.  Deleveraging and similar cut-backs may feel intuitively appropriate, but these strategies may not- in the long run- increase stability or sustainability.  After all, “Debt simply reflects an  ownership claim on a stream of returns—a transfer of money from debtors to creditors,”  – and if the cash-flow of the economy is crippled, no amount of debt-restructuring will help.

Fourth; there has been little (if any) empirical evidence that interest-rate led interventions by government have any lasting impact on investment.  “In the standard putty-clay model, firms, able to get access to long-term capital at a very low interest rate, will invest in highly capital-intensive technologies, because wages have not  fallen as much as the cost of capital. But this means that, at any given level of demand for output, employment will actually be reduced. Thus, loose monetary policy today may be  setting up the conditions for a jobless recovery in the future. Even today, the outlines of such a  situation are already visible. The knowledge that weaker demand for labour lies ahead affects  consumption demand directly and indirectly, as it puts further downward pressure on wages, worsening the distribution of income.  The importance of this is not that we should have tight monetary policy. It is that we cannot rely on monetary policy for our recovery, and that other government policies have to be put in place to offset the potential and real adverse effects that we have described.”

Where Do We Go From Here?

Economic policy is informed by tools of measurement and conceptualisation; we need to understand how fast something is moving, in what direction, and with what characteristics to best understand where it will go, and therefore- conceive how we can influence that.

Events of recent decades have shown that our measurements were wrong, in fact very wrong- meaning that the conceptions and interventions that resulted were similarly inappropriate.  To use the analogy of conflict, one cannot fight a guerrilla army with conventional heavy artillery (hence our failure to be able to deal with international terrorism).

If policy-makers are to safeguard the future of the world’s economy, they must change tactic soon and rapidly re-invent the lenses and tools with which they measure, model and guide it.  This means significant reform at the local, regional, national and international level; but luckily we are at the first moment in humanity’s history where we have the technology to be able to do it.

My hope for the future is that the economic models of today are confined to where they belong, history.

Up Next: The Security of Cyberspace