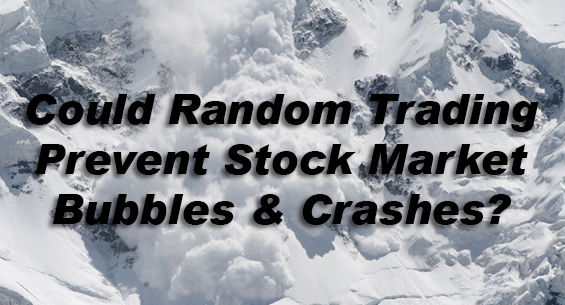 Many of recent history’s most significant market events have manifest in what was (previously) the extreme of the market.  These “bubbles” and “crashes” follow power laws, meaning that (in theory) they could reach any size and fundamentally threaten the functionality of the entire financial system.

Typical central-bank and policy responses to these financial avalanches (or cascades) have been to create or constrain liquidity in the market, and the terms of that liquidity; thus creating an artificial ceiling or cushion- in the hope of managing the event.

In an interesting paper entitled ‘Stopping Financial Avalanches By Random Trading,’ a group of academics from Italy and Switzerland propose an innovative intervention that could work to proactively prevent these events, rather than simply responding to their fall-out.

The basic premise is rather simple.  In the same way that the chatter of customers in a bar can stop you from listening to the music, they hope to insert ‘noise’ into the market in the hope to stop participants from hearing the music of the herd.

Using the Olami-Feder-Chrstensen (OFC) model (typically applied to understand earthquake dynamics), and a small-world (SW) network, the researchers created a ‘market-like’ platform where agents (through whom information cascades) have varying social influence and exhibit herding effects (such as orienting decisions and behaviors based on others… particularly during volatile or unclear periods).

The researchers note that, “…in situations of high uncertainty, personal information exchange may reach market-wide impacts, as the examples of bank runs and speculative attacks on national currencies show.”  It’s important to note that the modeling objective here was not to create an accurate reproduction of financial markets in their entirety, but rather to look at the behavior of a group of ‘n’ agents during crises.

The Introduction of Randomness

A significant body of research (economics and biological) has shown that randomness can have beneficial effects on system performance.  The researchers note also that in the long-term, random investment strategies provide gains comparable to those seen where technical strategies are applied.  In their model, the researchers created a group of ‘random’ traders who are not activated by (or sharers of) market information, who trade randomly within their model environment.

To understand the impact these traders have on market stability, the researchers chose to look at the capital impact following extreme events, and also the wealth-distribution in the long-run of these events.  In the ‘real world’ context this could be seen as the market participants who incur the greatest losses/gains in a bubble or crash- together with the ‘overall’ market capitalization of the system at the end.  Amazingly, their model confirmed that the “…adoption of random strategies diminishes the probability of extreme events (in this case large capital increases or

great losses) but also ensures almost the same average wealth over a long time period, at variance with other technical strategies…”

From Research to Reality

There is little arguing with the fact that the ‘Rational Expectations’ paradigm and the ‘Efficient Market Hypothesis’ are outmoded ways to describe the market; neither accounts for emotions, social-influence and behavioral biases.  It is these latter elements that typically drive the appearance of bubbles, crashes and other extreme behaviours within the market.

It would seem (albeit in the lab) that by inserting noise into a market, the rapid herding behaviour causing bubbles and crashes can be dampened. The authors also note that, “….by preventing extreme price variations, random investments [we] also help to identify the equilibrium price.”  This latter point is important.  If we remove herd-related volatility from the market (which is a significant contributor to up and down-swings) we get much more realistic price-discovery.  Price increases and sell-offs in this scenario are much more likely to be supported by fundamentals of the underlying instrument or the relevant market itself- which can only be a good thing for market stakeholders.  In fact, any large enough market participants (such as pension funds, large hedge funds and so forth) could also insert random trades into their portfolio or trading areas to reduce overall volatility.

As the markets have grown in their momentum and complexity, the instruments by which central banks can modulate and dampen them have not matched the market in terms of innovation and appropriateness (in effect, it would be like trying to understand the modern day internet using an analog telephone).

A lot more research would need to be done to see if this kind of approach could bring genuine dampening and risk-management functions into the markets, but if wider-testing is as promising as the paper? We could see a day where central banks are able to not just dampen the market, but also make money for the taxpayer in the process.

Up Next: A Conversation with Eliot Brown on The Cult of We: WeWork and the Great Start-Up Delusion